Disclosure: We may get commissions for purchases made through links in this post.

When you're preparing for a project, it is natural to overprepare. Perhaps you have a lot of glue left over. You might think it lasts forever. However, is that true? If that's your concern, let's go over the details.

Unfortunately, glue does have an expiration date. However, it can react differently. For example, some are gelatin/protein or water-based. These types can become moldy and unusable. Other types of formulas will become ineffective over time.

There are many types of glue available to you. So, if you want to know when your glue will expire, we'll have to go based on the formula. It's also crucial to learn how to store it. This way, you can extend its shelf life as long as possible. To learn more, keep reading. 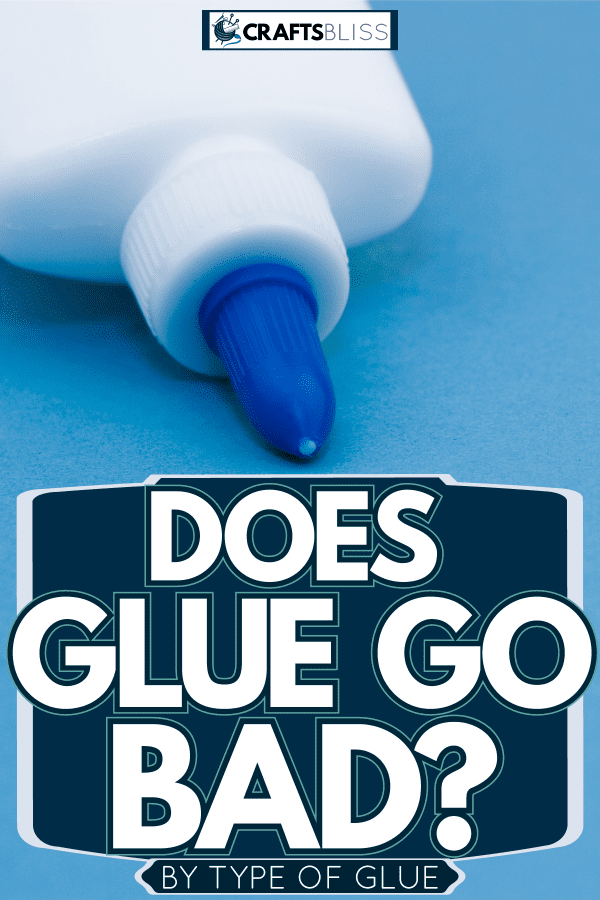 When Does Glue Expire?

In most cases, the glue expires because of improper storage. Assuming you're not leaving it out in the open, it can last two to three years. Sometimes it might last longer. However, the longer you wait, the less effective it can become.

That two to three-year shelf life applies to water-based glues. Some examples that come to mind are spray adhesives, markers, paint, liquid glue, and paper-backed adhesives. As long as you store them adequately, they shouldn't rot nor degrade. 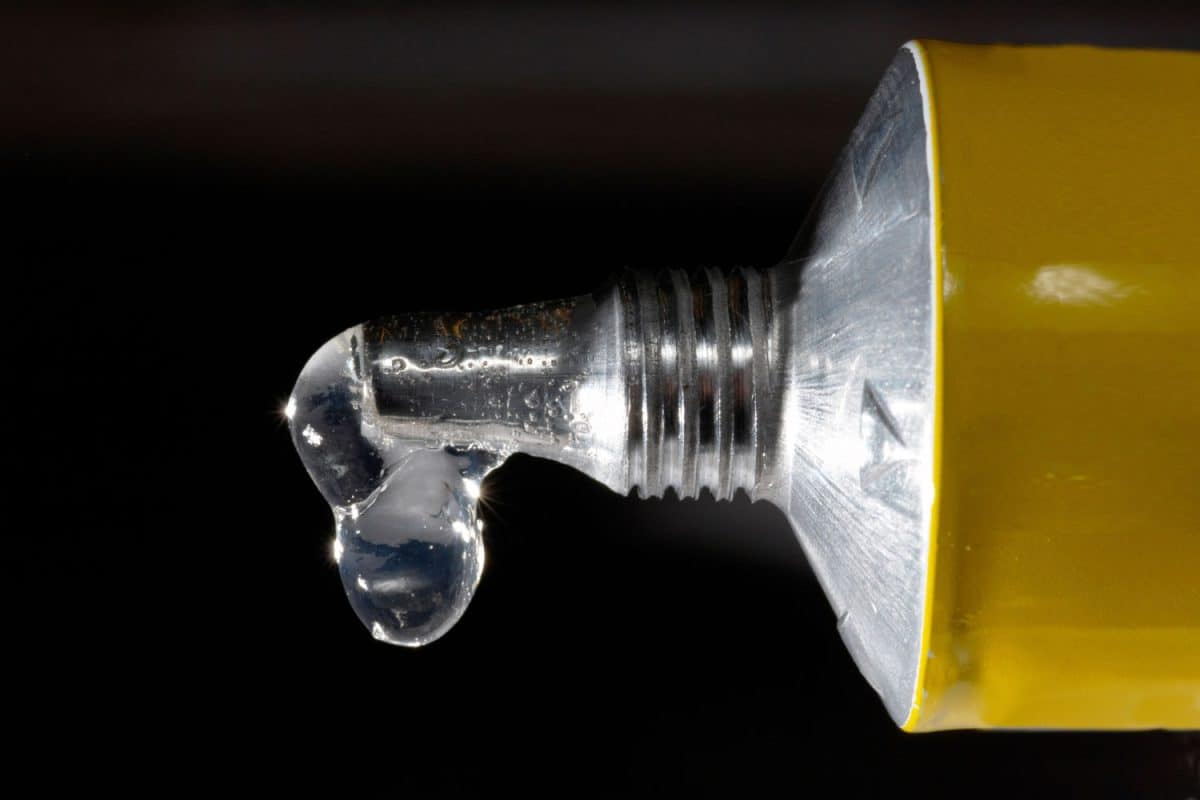 If you have a batch that you haven't opened, you can expect the glue to last even longer. The glues that are already open will have exposure to oxygen. So, once you open the bottle or packaging, the clock will start ticking.

How Do You Know When Water-Based Glue Goes Bad?

Before we discard things, it's essential to check if they still work. However, you might not be able to do that with water-based glue. One sign that indicates it has gone bad is mold.

It might be surprising, but it can happen! White-color glue can turn brown. Sometimes, you might even see mold spores. Mold growth on glue is a rare occurrence.

In most cases, you'll know your water-based glue is no longer useful when it's not sticking as well as it should. At worst, it can dry and harden in its container. You might notice yellow discoloration and a sour odor developing as time goes by.

At this point, it would be best to throw the glue away. Otherwise, you can try to remove the dried areas. Keep in mind that it won't work as well as it did in the beginning.

If you're working with wood, wood glue is typically the go-to adhesive. It can be clear, yellow, or white. In addition, it's an odorless, rubbery polymer that seals pores in materials. People use it for gluing porous materials like wood, paper, or fabric.

Wood glues generally contain an additive called Polyvinyl Acetate. Thus, you can categorize it as water-based glue. They won't have an expiration date on the bottle.

Still, you can expect it to last as long as three years. That is assuming you store it in appropriate conditions. 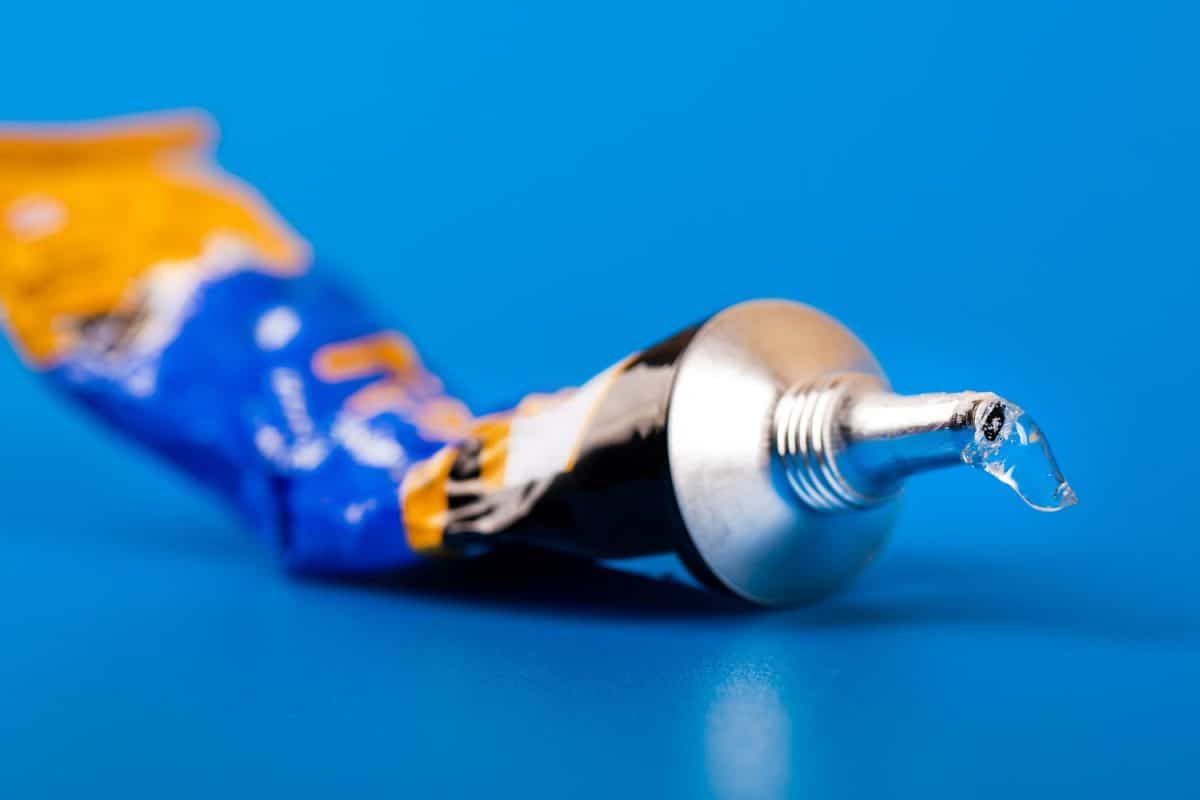 When you need a heavy-duty adhesive, super glue is one of the most reliable. It works on a variety of materials like plastics, wood, paper, ceramic, metal, and rubber. However, super glue is a vague name.

What we want to know is the type of glue it is. So, if we look for the specifics, we learn that super glue is also known as cyanoacrylate glue. In other words, it's an adhesive that contains cyanoacrylate esters.

This type of glue is known for its fast curing time. Unfortunately, super glue tends to expire much sooner than water-based formulas. However, it's all temperature-dependent.

So, if you want to increase the shelf life of your super glue, you can store it in the freezer. Unopened bottles of super glue can last around 12-15 months.

After you open it, that timeframe can drop significantly. Generally, if you store it in dry and cool conditions, it should last around 6-12 months. So, hold it in a freezer as soon as you open it.

Otherwise, you risk letting it go bad in as little as a month.

The name above might not be familiar to you. However, you might be familiar with the tool that uses it, the hot glue gun! It's a glue sealed in foil cases.

While it looks like it can't expire, it unfortunately does. Like other glues, it has a shelf life. You can expect them to work well for at least a year. After this period, it tends to be ineffective.

It doesn't have glue in its name, but epoxy falls in that category. It's a two-part adhesive. You'll usually see two substances in different containers.

When you're ready to glue something, you mix them in a 1:1 ratio. Epoxy is one of the strongest glues you can use. Regardless, it's also a glue that can go bad. However, it's one of the longer-lasting glues.

As long as you store it in good condition, it can last as long as 15 years. Still, you're trading something when you wait that long to use it. If your project requires strength and clarity, it's best not to use old glue.

When you don't store epoxy in appropriate conditions, it tends to go bad quickly. It can become ineffective in as little as six months. Once it turns into a jelly-like substance, it's no longer useable as glue.

Working with wood requires different kinds of adhesives in some cases. One glue that you'll run into is polyurethane glue. Polyurethane is a material that many woodworkers are familiar with.

Polyurethane glue tends to have a shelf life of a year. That's if the container is unopened. The problem with polyurethane is that it reacts to moisture.

So, if you're unlucky, it can quickly become unusable. You can determine the quality in a few ways. Is it still liquid? It should remain useable.

Has it become stringy and changed color? At this point, it's probably solidifying in the container. Thus, it would be best to discard it.

If you're lucky, you'll find that manufacturers state their glue's shelf life on their website. It's also possible to find a technical sheet with their specifications.

Loctite is one glue manufacturer that states the shelf life of its glues. Another example would be Gorilla Glue.

More specifically, Gorilla super glue tends to last at least one year from the production date. Others are nearly impossible to find. If you want an accurate estimate for a specific brand, it would be better to call representatives to ask for clarification.

Otherwise, you can estimate a one to two-year shelf life. That's an estimate based on the shelf life of the other glues.

Is It Safe To Use Expired Glue? 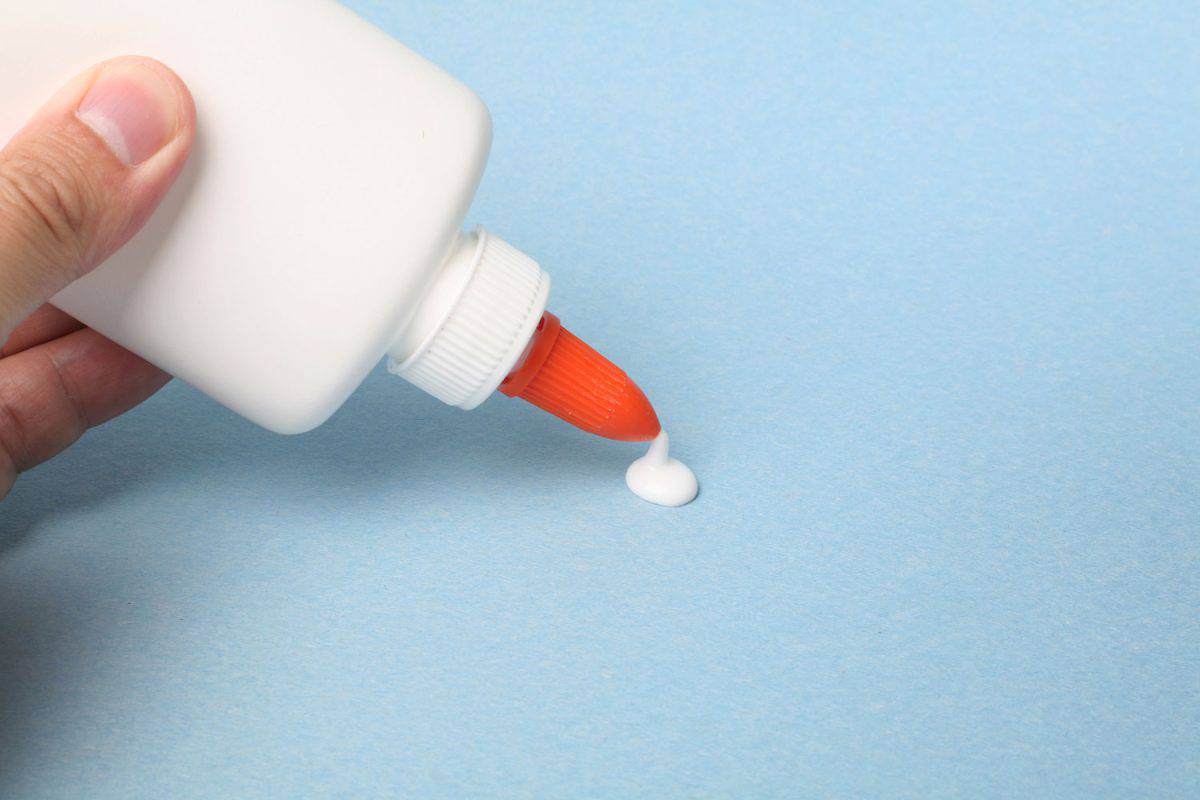 As time goes by, the glue won't show its age. It might look as fresh as it did in the beginning. Is it safe to use once it goes past the general 1-2 year shelf life?

There isn't a universal answer to this question. It will depend on how the glue performs. How well the glue bonds to a material determines if it's still useable.

Still, it's safe to assume that the bonding properties won't be the same after it expires. Therefore, it would be better to get a fresh batch than risk redoing your project. In any case, it's up to you to determine if the expired glue will stand the test of time after it dries.

What Is The Best Way To Store Glue? 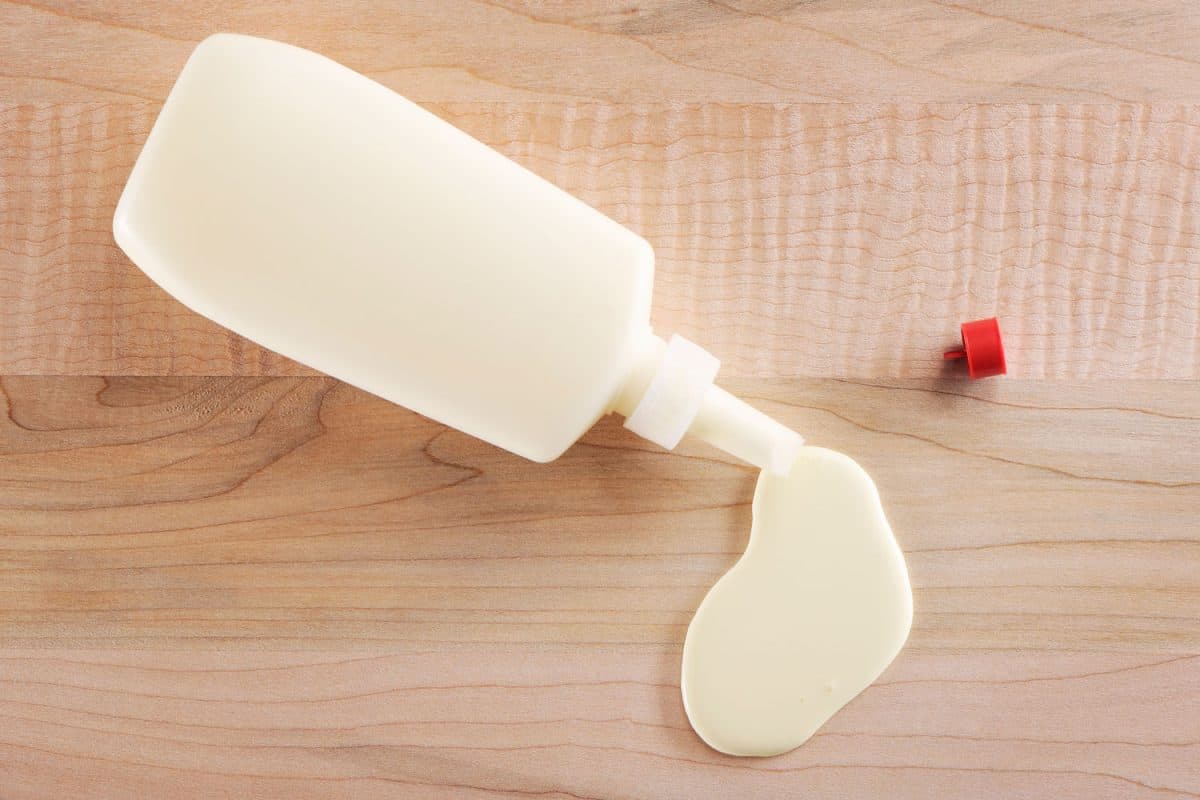 You want to get the best out of the products you buy. But, to do that, we need to follow the best procedures. This way, we can increase the shelf life of the glue.

If you want your glue to last, you can't carelessly throw it anywhere. The glue can react negatively to certain conditions. For example, never keep glue near a window.

The sun can raise the temperature of the adhesive. As a result, the composition will change. Avoid storing your glue near sunlight or high temperatures.

Keep It In A Ziplock Bag

Instead, store it in a dry and temperature-stable area. Areas that you can place it in include cupboards and freezers. If you want to add a layer of protection, you can also put the container in a ziplock bag. Squeeze out as much air as possible before sealing it.

It's also crucial to keep up with cleanliness. We're all familiar with the bit of glue that lingers from the tip of the container. Always clean it off before you put the cap back on.

Don't Transfer The Glue Into A New Container 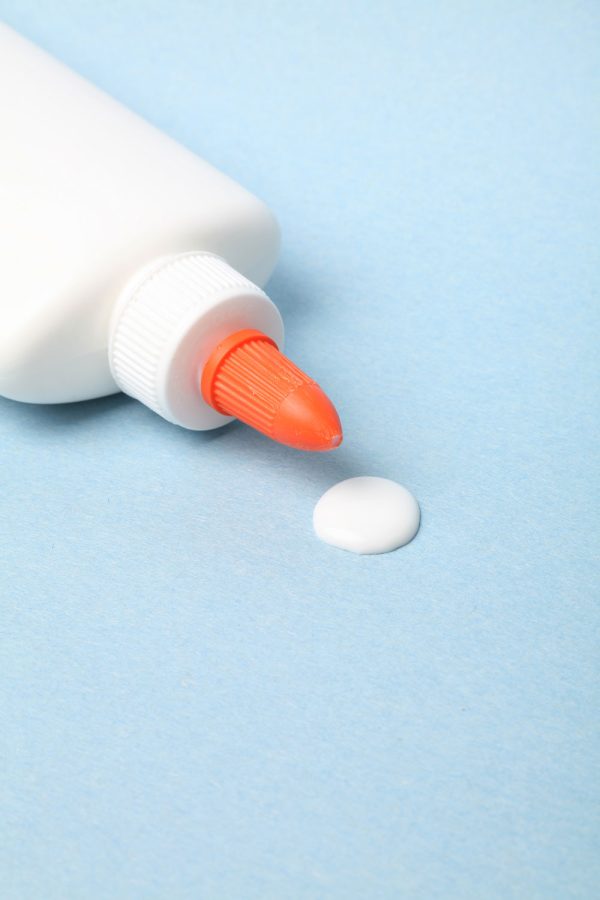 Regardless of the glue, the clock starts ticking when you first open the bottle or container. If you want it to last, you need to limit its exposure to air and moisture. Otherwise, it's going to set quickly.

It might seem like a good idea to transfer the glue to a more convenient container. However, doing so will only expose more of the glue to oxygen. Therefore, it's better to keep it in its original container. 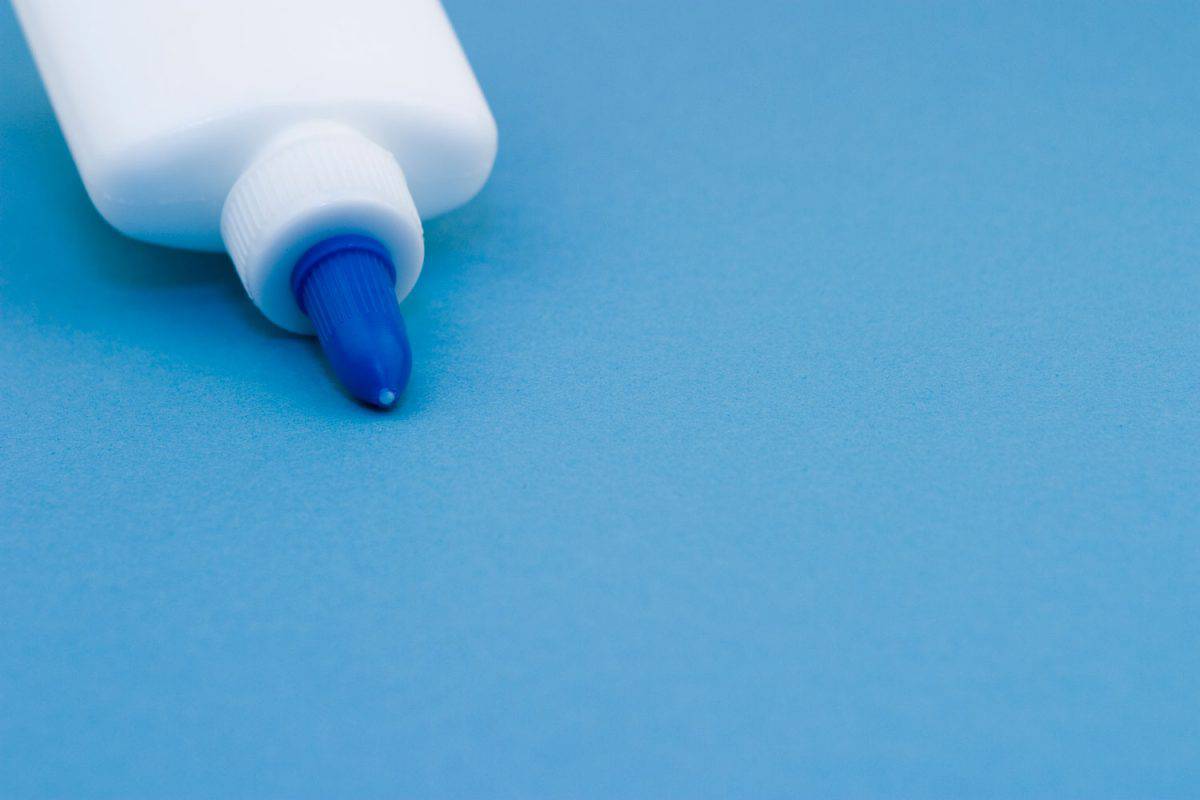 Now we have a general idea of when glue expires. Depending on how long you've held on to it, you can throw it out or continue using it. In any case, make sure to use it before it goes bad! We hope you found the information above helpful!

Before you go, do you have other glue concerns? Do you need a super glue substitute? We can recommend some! To learn more, check out:

Are you wondering if super glue is waterproof? We have the answer. For more information, check out:

Polymer Clay Not Hard After Baking – What To Do?

Can You Bake Polymer Clay In An Air Fryer?

4 Of The Best Cotton Yarns For Dishcloths

Does Glitter Sink In Resin?

What Happens If You Don’t Cure Soap?